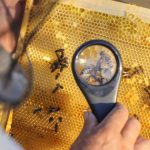 Machine learning is a complex process that involves training computers to analyze information. Now, thanks to an innovative program being developed by a Swedish beekeeper, machine learning may be applied to beekeeping to help detect Varroa mites.

Bee colonies around the world are facing extreme pressure from a variety of threats.

Millions of colonies are lost each year globally, with more than 40 percent of colonies being lost annually in the U.S. One of the significant threats facing bee colonies is Varroa mite infestations. The Varroa Destructor is a parasitic mite that can destroy an entire colony quickly. Until now, detecting Varroa mites has been a time-consuming process.

Swedish beekeeper Björn Lagerman noticed recently while examining a closeup photo that he could see Varroa mites in the image. This discovery eventually led to the idea of using machine learning to analyze photos of bee colonies. Computer analysis of bee colonies has the potential to be both more reliable and faster than human analysis at detecting Varroa mites.

The BeeScanning app that is being developed will allow beekeepers to take photos of colonies using a smartphone. The app will then analyze the photo, scanning for evidence of Varroa mites or other problems. Once the app detects Varroa mites, it will also offer a recommendation for the beekeeper.

In an effort to train the software to reliably analyze colonies for the presence of Varroa Destructor mites, the team has collected 40,000 images from thousands of different colonies.

The goal of this program is to allow beekeepers to quickly and reliably detect Varroa mites earlier while there is still time to treat the infestation. Unfortunately, the current difficulty in diagnosing infestations often leads to the problem being missed and the colony dying off during winter.

At Marshall’s Farm Natural Honey, we embrace a hand-crafted approach to honey production. Our honey is harvested in the unique microclimates of the San Francisco Bay Area. Contact us today at 707-556-8088 to learn more, or browse our store to see our products.