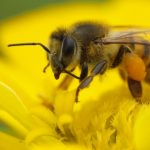 Honey bees may be named for the sweet concoction they make from the nectar of flowers, but this isn’t the only food our favorite pollinators store in their hives. In addition to honey, bees also create a partially-fermented food called bee bread as well. While honey provides bees with plenty of carbohydrates for energy, bee bread rounds out their diet by serving as their main source of protein.

So how do bees make their bread?

The primary ingredient in bee bread is pollen, which is rich in protein but difficult to digest in its raw form. When bees forage, they collect pollen from flowers and store it in special “baskets” on their hind legs called corbiculae. Grain by grain, the bees fill these baskets until they have dense balls of pollen stuck to their legs. In fact, a fully-loaded bee can carry up to a third of its body weight in pollen!

Upon returning their hive, the foraging bees deposit the pollen in honeycomb cells, where worker bees mix the pollen with small amounts of saliva and nectar. This mixture triggers the fermentation process, which increases the pollen’s nutritional value and makes its protein easier to digest. After a few days, young female bees distribute the fresh bee bread throughout the colony, feeding larvae, adult bees and the queen.

The labor-intensive process of gathering pollen for bee bread takes such a toll on the forager bees that they typically die just a few weeks after the foraging season begins in the spring. Thanks to their efforts, however, they’re able to sustain a new generation of bees and keep their colonies buzzing into the future.

← Join us for Our Earth Day Pollinator Pop-Up!
The EPA Bans a Dozen Neonicotinoid Pesticides →