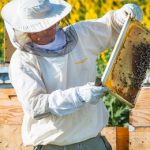 Over the course of the past 10 years, the honeybee population in North America has declined by about 30 percent. This disturbing trend is taking a dangerous toll on crop pollination, and it has scientists throughout the continent looking for ways to fight Colony Collapse Disorder (CCD) and help bees recover from illness. One of the ways they’re doing this is by “eavesdropping” on bee colonies to try and get a better sense of what bees are saying to one another with regards to their health.

At Simon Fraser University in British Columbia, Canada, researchers are monitoring about 20,000 honeybees in an effort to get a better understanding of what causes CCD and how to protect bee colonies from collapse.

According to a recent article on Phys.org, Simon Fraser graduate student Oldooz Pooyanfar has developed a new technique that allows her to listen closely to bees in their hives. Using an array of tiny sensors and microphones, Pooyanfar is able to record sounds and vibrations in a hive that are indicative of different bee behaviors. The data she collects tells her more about what the bees communicate to one another in different scenarios, like when they are swarming or looking after their queen.

Pooyanfar is still at the beginning stages of her research, so there aren’t many details about what she has discovered just yet. Soon, she hopes that her work will help beekeepers to identify the early warning signs of CCD and improve colony management procedures. She also plans to create an easy-to-use sensor package that would allow beekeepers to monitor their own hives in real time. By listening closely to what their bees are saying, beekeepers may be able to react to signs of trouble more quickly, thereby protecting colonies from serious health issues such as CCD.