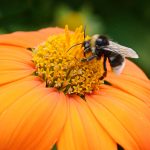 Have you heard the buzz? Four species of California’s native bumble bees will soon be protected under state law. The California Fish and Game Commission recently voted to begin the process of classifying the four species as endangered.

The Fish and Game Commission’s vote begins a year-long scientific review process, leading to official protection for the four species.

All four are already in grave danger. Franklin’s bumble bee hasn’t been seen in the wild since 2006. The Suckley cuckoo bumble bee has been classified as critically endangered by the International Union of the Conservation of Nature, and Crotch’s bumble bee and the western bumble bee have declined in relative abundance by 98% and 84%, respectively.

Protecting native bees is essential to the environment. Wild bees are responsible for pollinating 80% of crops on earth, so preserving bee species also means preventing plants from going extinct and ensuring a sustainable food supply.

“This vote is crucial for the continued survival of these pollinators,” said Kim Delfino, California program director for Defenders of Wildlife in a press release. “The Commission’s vote sets a precedent not only for California but for the country to express the important role pollinators play in preserving our biodiversity.”

Hopefully, with the help of the state Fish and Game Commission, California’s native bumble bees can finally get the help they so desperately need.