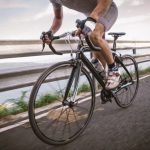 Athletes all over the world will spend huge amounts of money on performance-enhancing drinks and supplements, not even realizing that their secret weapon may already be resting right behind their cupboard doors. Back in September of 2001, the U.S. National Honey Board reported the positive effects of honey on various athletes in three clinical trials.

It was later solidified at the annual Experimental Biology conference that during intense exercise, honey does in fact deliver a significant performance boost.

Still don’t believe it? Well consider the fact that not only did Great Britain’s 2012 Olympic Canoeing team choose to incorporate honey into their daily training regime, but legendary boxer, Mohammed Ali also credited raw honey as his own secret weapon in the ring.

It’s really no surprise that athletes have relied on carbs for an energy boost during training, and honey is jam packed with the stuff, containing 60 calories and 17 grams of carbohydrates – 16 grams of which comes from sugars. In all three double-blind studies conducted by the University of Memphis Exercise and Sport Nutrition Laboratory, principal investigator, Dr. Richard Kreider stated, “We wanted to see if honey would be a good source of carbohydrate for athletes, in comparison to other forms of carbohydrate. Honey did as well or better in several areas.”

The added benefit with honey is that you get all of those necessary carbs without having to consume any of the refined sugars and high fructose corn syrup that can be found in many of our favorite sports drinks. Honey provides an all-natural boost of energy without harming your body or inducing hypoglycemia, and as an added bonus – it’s delicious!

So pour some in your morning tea, drizzle a bit on your favorite pre/post workout snack or simply gobble up a teaspoon’s worth. No matter how you choose to consume your all-natural, raw honey, we’re sure it won’t be long before you start notice the difference in the gym or out on the field!

← A Sweet Tradition: Honey and Challah
The Buzz About Nature’s Cough Suppressant →