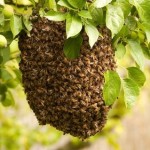 You’re not alone. Scientists have been trying to find a definitive answer to this puzzling question for years. When a swarm sets out for a new home, only about 3 to 4 percent of the bees have actually scouted out the destination in advance. In spite of this remarkable fact, the bees are still able to coordinate closely over miles of rough terrain to arrive at their new home at the same time. As the bees get closer to their destination, the swarm even slows down its pace in anticipation of their arrival.

One theory suggests that the bees use attraction pheromones emitted from worker bees’ abdomens to guide the swarm from one place to another.

In 2006, researchers tested this theory by sealing the scent organs of the worker bees in a swarm to see if they would still be able to navigate effectively. It did take the bees with sealed scent organs roughly twice as long to get to their destination as those in a separate control group, but they were still able to find their way. The researchers concluded that there must be some other mechanism that works in conjunction with pheromones to guide swarms on their journey.

A second theory suggests that “guide” bees use visual signals to tell other bees where to go.

These bees will hang back towards the back of a swarm and then fly quickly in a straight line towards the front. These short sprints tell other bees which direction to head in. in 2008, another study tested this hypothesis by using high speed cameras to track the movement of individual bees in a swarm. Sure enough, scientists were able to observe the guide bees sprinting up to the front and then falling back again as the bees flew from place to place.

Scientists still aren’t sure how bees know to collectively slow down as they get closer to their destination. They’re also not sure how the scout bees signal to the rest of the swarm that it’s time to leave. It seems that for every bee mystery we solve, another is just waiting to buzz into our baffled brains.