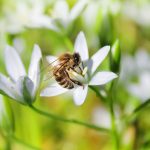 Pollinators—particularly honey bees—have had their fair share of hardships in recent years. The spread of mysterious diseases, damage from neonicotinoid pesticides and widespread habitat destruction have all conspired to make it increasingly difficult for pollinators to survive, much less fertilize crops each spring. General Mills has relied on pollinators to fertilize crops for more than a century, and that’s why the multinational food producer is partnering with the USDA and nonprofit wildlife preservation group The Xerces Society to rebuild habitats for bees, butterflies and more.

Since 2011, General Mills has invested $6 million in habitat restoration efforts for pollinators in North America.

In the company’s latest charitable endeavor, General Mills donated $2 million to an initiative lead by Xerces to restore 100,000 acres of North American farmland over the next five years. Xerces is working to accomplish this ambitious goal by collaborating with farmers and educating them about what types of flowers and shrubs they can plant to attract pollinators to their crops. They will also help to develop plans that minimize the use of harmful pesticides. While farmers are typically very good at growing a few specialized crops, many of them are more-or-less unaware of what it takes to develop a diverse habitat for pollinators.

“Most of our products contain honey, fruits, vegetables and other ingredients that require pollination,” said General Mills’ Chief Sustainability Officer Jerry Lynch in an interview. “So healthy and abundant bee populations are a priority for us.”

When pollinators are able to thrive in robust, healthy habitats, everybody wins.

Hopefully as more food producers recognize just how important these magnificent little creatures are to their business, other companies will invest in habitat restoration efforts as well.

One Response to General Mills Invests Millions to Protect Pollinators