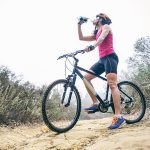 Honey makes a big splash when it comes to flavoring your favorite tea, but did you know it can also make a difference in athletic performance? According to Scientific American, athletes should ditch the protein powders and gels and add a little honey to their diets and workout routines instead.

Plenty of serious athletes take workout gels to boost their workouts, either before or during strenuous exercise or competition. The gels usually boost performance by giving them a bit of extra stamina, keeping their bodies fueled, and their muscles moving.

A study presented at a recent Experimental Biology conference showed that a little extra sugar and carbohydrates can stimulate performance during strenuous exercise, but the sugar and carbs don’t have to come from performance enhancing gels. In fact, natural honey can offer many of the same benefits as well.

By the way, when we say “carbs” here, we’re not talking about things like bread and pizza, but complex carbs like honey … so no substituting a large calzone for your workout gel.

Honey is a special combination of natural sugars, and has performed just as well as workout gels when used to keep athletes on top of their game. Its sugars boost the body’s glucose levels just the right amount, and give the body that extra needed boost of endurance.

Cyclists who eat a bit of honey before an intense workout or race and then again every ten or so miles perform better than cyclists who consume other sports gels that are intended to have the same effect. In one study, cyclists who took a gel or honey prior to and during a race had healthier resting heart rates than cyclists who stuck with water.

So next time you pick up a jar of Marshall’s Farm Natural Honey from one of these local California retailers, consider adding it into your workout in place of your regular supplements. It probably tastes a heck of a lot better than that synthetic stuff too!