For many weddings, traditional practices and rituals impact the procedural process or ceremony. The use of honey has found a 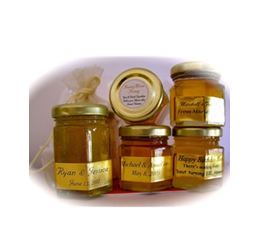 way into many nuptial ceremonies and marital contracts.  Because honey dates back thousands of years, many ancient societies used honey during weddings to commemorate the love between bride and groom. Here’s a look at some of the traditional uses of honey during marriages. Perhaps some you’d be interested in implementing into your wedding here in California.

Ancient Egyptians believed honey was such a vital substance, every marriage contract between the bride and groom came with a promise from the groom to supply his bride with a yearly supply of honey. They would say, “I take you for my wife and bind myself to furnish you annually with twenty-four hins (32 pounds) of honey.”

In Hindu culture, the groom once again would recite something to his bride. “This is honey, the speech of my tongue is honey, the honey of the bee is dwelling in my mouth and in my teeth dwells peace.”

Europeans also introduced honey into wedding ceremonies. For example, young newlyweds and guests would sing a song at weddings. “Diligent is the life on a farm, like the life of the bee, and marriage is sweet as honey.”

None of these traditions are must follows by newlyweds here in the United States, but they are fun to introduce now and then at weddings.  We have plenty of different sweet tasting honeys and baskets to use, before during and after the wedding. We even have honey party favors to give to guests.  Check out more of the traditions used by ancient cultures and people by clicking here.