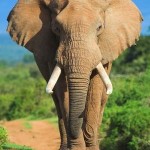 Here in North America, farmers have crows, deer and gophers to contend with in their fields. In Africa, the local pests are a little bigger. In countries such as Kenya and Botswana, elephants have been known to destroy entire fields as they trample crops and forage for food. Over the years, farmers have tried everything from huge fences to deep moats to keep elephants out, most of which are only marginally effective. Then, in 2009, local farmers and a zoologist named Lucy King realized something about the elephants: they were terrified of bees.

Enter the Elephants and Bees Project

Armed with their knowledge of the elephants’ fear of bees, Lucy and the local farmers went to work, hanging suspended beehives every ten meters around the perimeters of the farmers’ fields. Sure enough, the elephants began giving the crops a wide berth. Just the sound of the bees was enough to keep the elephants away. Further research revealed that elephants even emit a low frequency alarm to alert other elephants about the presence of the bees. The Elephants and Bees project worked so well that it has since been adopted in a number of other countries such as Sri Lanka, Mozambique and Uganda. In 2013, the project was the recipient of the St. Andrews Prize for the Environment.

In addition to protecting fields from elephants, the bees also help the farmers by pollinating their crops. The farmers have also been able to harvest honey from the bees and sell it for extra income. Thanks to these bees, farmers in Africa can rest a little easier knowing their crops are protected and well-pollinated.