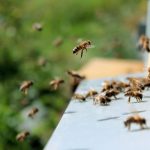 Researchers have yet to identify a cure for colony collapse disorder (CCD), but in recent years a number of scientists and beekeepers have found ways to effectively mitigate CCD’s harmful effects on honey bee colonies. In Italy, Dr. Francesca del Vecchio embarked on her own quest to do something about CCD after the mysterious phenomenon wiped out roughly 80 percent of the bee colonies in her area in 2008.

Although most of the colonies in the region were devastated by CCD, Vecchio noted that the bees on one family farm remained generally healthy during the outbreak. In an effort to find a way to protect other colonies against CCD, Vecchio began studying the diets of the bees on this farm, looking for nutrients that might bolster their immune defenses.

Based on her research, Vecchio was able to develop a nutrient supplement designed to help honey bees fight disease and cope with exposure to pesticides.

Vecchio’s supplement, BeeVita Plus™, contains a variety of naturally-occurring ingredients such as amino acids, lipids, antioxidants and minerals that bees need to maintain a healthy immune system. The supplement can even help control varroa mite infestations in bee colonies.

Although supplements like BeeVita Plus are not long-term solutions to CCD, they can serve as effective stopgaps for beekeepers who are concerned about the health of their hives. Thanks to the efforts of researchers like Dr. Francesca del Vecchio, beekeepers have access to a variety of helpful new tools that weren’t available just a few years ago. Together, we can all do our part to protect pollinators in our area.