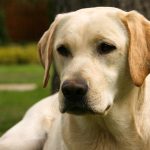 It’s a busy time of year for America’s honey bees. In California alone, close to 2 million colonies of bees are pollinating the state’s almond orchards. Meanwhile, on the other side of the country, farmers in Maine are depending on bees to pollinate their blueberry crops as well.

Because this is such an important time of year for the insects, beekeepers are on high alert for health issues that could compromise their colonies ability to pollinate. Foremost among these health concerns is American foulbrood, a devastating bacterial disease that can quickly wipe out large populations of bees if it’s not contained.

At the Maryland Department of Agriculture, chief apiary inspector Cybil Preston has help finding foulbrood bacteria thanks to a talented duo of four-legged detectives.

Preston’s Labrador Retriever Mack has been sniffing out foulbrood bacteria in bee hives for four years. Mack inspected about 1,700 colonies for foulbrood last winter and he’s not slowing down anytime soon. This year, Preston is training a Springer Spaniel named Tukka in the finer points of foulbrood detection, too.

It takes about nine months to train each dog, but once they get the hang of their trade they are far better at detecting foulbrood bacteria than human inspectors. Not only can the dogs smell foulbrood in very small quantities, they can also inspect hives without opening them and disturbing the bees. According to Preston, four people working full time can cover less than half the hives that Mack can in a day.

Now, Preston hopes to expand her canine detection program so that her department can inspect even more hives for foulbrood spores in future seasons. With Mack and Tukka on the job, Maryland’s beekeepers can rest a little easier knowing their hives are foulbrood-free and ready to pollinate America’s crops.