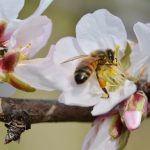 Every year, beekeepers from all over the country send hives to California to pollinate the Golden State’s many almond orchards. It takes millions of beehives to support the pollination needs of California’s almond growers, and each one of these hives costs $200 a piece. Now, the bee brokers who arrange contracts between beekeepers and farmers are becoming increasingly concerned about a rash of hive thefts that struck California during 2016’s pollination season. In total, 1,734 hives were stolen from California’s almond orchards this year. As a result, hive prices have skyrocketed and bee brokers are finding there aren’t enough hives to go around.

So who are these mysterious bee bandits and what do they want with all the hives?

“If someone steals the hives, they have no upfront costs,” said beekeeper and U.S. Representative Rob Taylor in an interview with NPR. “Any honey the pull off at the end of the season is pure profit; they are short-cutting the system.”

So far, there have been few convictions in the thefts. Because many hives are unmarked, it can be next to impossible to distinguish stolen hives from legitimately obtained ones. When hives are marked, thieves can simply remove the frames and put them in in new unmarked hive bodies.

To combat the problem, some beekeepers are installing GPS tracking systems in hives in hopes that they could be recovered in the event of a theft. Meanwhile, orchards have begun hiring guards to patrol their crops overnight. Hopefully with the help of local law enforcement agencies, beekeepers and growers will be able to curb this troubling trend and bring the bee thieves to justice.