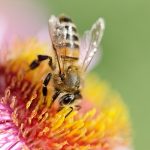 Neonicotinoid pesticides have emerged as one of the foremost threats to honey bee colonies in recent years, but a new type of micro-particle developed by researchers at Washington State University could help protect bees from the toxic effects of pesticide exposure. These tiny particles—which are roughly the size and shape of a grain of pollen—act as “magnetic microsponges” that specifically target toxic residues left by pesticides in a bee’s digestive system.

“We’re really lucky that bees have fairly simple digestive systems,” said postdoctoral research associate Waled Suliman in an interview. “Our material is specifically designed to work only on pesticides residues and only at a certain pH level and temperature. So the micro-particles won’t absorb amino acids or anything else a honey bee eats.”

When bees consume pollen that’s been tainted by pesticides, these toxic residues gradually accumulate in their bodies. Over time, this residue buildup can significantly reduce a bee’s lifespan.  By adding the powdered micro-particles to the sugar solution that’s used to feed bee colonies, the particles can absorb toxic residues before they’re able to cause permanent damage to the bees’ health.

The researchers completed preliminary tests on their micro-particles last year, and they’re planning to conduct additional tests this summer to determine how effectively it performs in real-world scenarios. Earlier this winter, the team’s micro-particle research also earned them a $10,000 prize from the Honey Bee Health Coalition’s Bee Nutrition Challenge. There’s still plenty of work to be done, but according to Suliman, his team hopes to have their product on the market in the next two years.