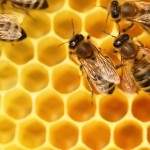 The negative effects of nicotine addiction in humans are well understood in the scientific community, but its impact on honeybees is only just recently coming to light. Scientists have been trying to identify a conclusive cause for Colony Collapse Disorder (CCD) for years now, and the latest suspect is a class of pesticides derived from nicotine.

Neonicotinoid pesticides might protect crops from pests, but unfortunately they don’t discriminate between harmful insects and helpful honey bees.

According to Chensheng Lu, a leading researcher in the search for an cure to CCD, recent tests have demonstrated that even exposure to minute levels of neonicotinoid pesticides seems to impair the “neurological function, memory, and cognition” of honey bees, making it difficult for them to navigate to and from their hives. Researchers also suspect that neonicotinoid pesticides are having adverse effects on the immune systems of bees, making them more susceptible to diseases caused by parasitic Varroa mites.

In another study conducted at Newcastle University, bees were presented with two options: a dish of sugar water and a dish containing neonicotinoid pesticide diluted in water. Sure enough, the bees were far more apt to go for the dish with the neonicotinoid. In spite of the adverse effects the pesticides have on bees’ nervous systems, they are still drawn to the addictive nicotine agent.

In response to these troubling findings, a number of cities and states have taken steps to ban the use of neonicotinoid pesticides in local crops. Portland, Oregon has already successfully prohibited their use on city-owned property, and lawmakers in Maryland are working to pass similar legislation as well.

While these new findings about neonicotinoid pesticides might not exactly constitute good news, they at least bring us one step closer to understanding and eventually curbing the disturbing phenomenon of Colony Collapse Disorder.

← Ever Wonder How Bee Swarms Navigate to a New Home?
Researchers Rethink the Royal Diet of Queen Bees →