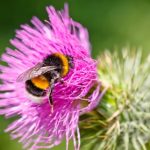 Large scale solar farms offer an environmentally-friendly alternative to old fuel-burning power plants, but they don’t always make the most efficient use of the land on which they’re built. In many cases, these solar farms are constructed on acres of monoculture grass that replace agricultural lands and habitats for local wildlife. Recently, however, some solar developers have begun exploring creative new ways to build solar farms that don’t compromise native ecosystems.

In Medford, Oregon, solar power company Pine Gate Renewables is in the process of developing a solar apiary that includes 48 beehives and 41 acres of native wildflower plantings. In addition to providing the bees with some much-needed room to graze, the solar apiary is also designed to benefit nearby farms by creating new habitats for pollinators.

“For me, it comes from a place of wanting to change the culture of solar and really taking into consideration more than just the panels,” said Julianne Wooten, environmental manager at Pine Gate Renewables in a recent interview.

Although the up-front cost of building this type of solar project is considerably more expensive than that of a conventional solar farm, the long-term maintenance costs are expected to be far lower. Whereas grass typically needs to be mowed about eight times a year to prevent it from blocking the solar panels, natural vegetation will only need to be maintained once or twice a year.

The solar apiary isn’t the first project of its kind, but it just might be the largest and most ambitious pollinator-friendly solar farm yet. Before too long, you might even be able to buy honey produced in beehives at your local solar farm!

← Maryland Beekeeper Trains Dogs to Detect Foulbrood Bacteria
Why Do Honey Bees “Beard” During the Summer? →