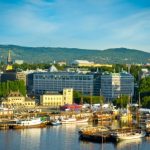 Thanks to a collaborative effort from the citizens of Norway’s capital city of Oslo, urban pollinators now have a swath of new flowerbeds and green roofs to graze on. It’s called the bee highway, and it was designed by the Oslo-based environmental group ByBi in 2015. The group works with schools, businesses and residents in the city to restore green spaces and provide bees and other pollinators with food and places to live.

To facilitate the growth of the bee highway, ByBi maintains a website that allows people to track where flowers have been planted, and what areas are still in need of more green space. It also monitors the paths bees take through the city so that people can see what places would benefit most from more nectar-bearing flowers. In addition to the green space that the project has created, an accounting firm in the city’s business district has also adopted two bee hives that can hold about 45,000 worker bees.

Oslo’s bee highway is the first of its kind, but its designers hope that the idea might spread to other cities. Rather than waiting for government agencies to pass nationwide legislation to protect pollinators, these environmentalists aim to effect positive change by finding local solutions that can then be shared with other communities and improved upon.

In the long run, these local efforts might give us the best chance of restoring pollinator populations on a global scale. Hopefully before too long we’ll be able to find bee highways in American cities as well.