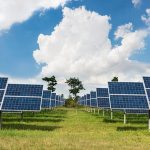 Of all the environmental issues that scientists have been trying to tackle in recent years, the need for clean renewable energies and healthy pollinator populations are among the most pressing.

Now, solar farms and apiaries in the Midwest are working together to address both of these issues at once.

In rural Minnesota, where large tracts of flat, undeveloped land have made solar arrays a fairly common sight, a group called Bolton Bees is working with energy companies to establish habitats for pollinators on solar farms. This initiative not only helps to support local pollinator populations, but also ensures that solar farm land is used as efficiently as possible.

Bolton Bees’ first project was on the SolarWise garden in Ramsey, Minnesota.  First, the Bolton Bees team replaced the turf grass below the solar arrays with species of low-growing plants that are known to attract pollinators. Then, they installed 15 bee hives on the property and let them forage on the newly-established meadows. Since this first project, Bolton Bees has received invitations from several energy companies to set up similar habitats on other solar farms in Minnesota, Wisconsin, Illinois and Iowa.

← Winter Honeybee Losses Lowest in More Than a Decade
Mushrooms: The Latest Tool in the Fight Against Varroa Mites →