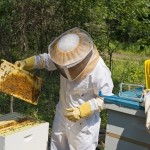 Honey bees have had their fair share of hardships in recent years. Colony Collapse Disorder (CCD) has ravaged bee populations throughout North America and Europe, and scientists have only just recently begun to understand what’s behind the disturbing phenomenon. To begin with, a common class of pesticide is impairing the neurological function of honey bees, making it difficult for them to navigate to and from their hives.

These pesticides have also left the immune systems of honey bees vulnerable to a mite borne virus called varroosis that deforms their wings and further compromises their health.

Now, scientists have confirmed that the rapid spread of this virus was facilitated by human interference in native honey bee populations. The problem began in the mid-20th century when Asian honey bees were first introduced to Europe and paired with native populations. The bees from Asia carried a species of parasitic mite that they had coped with for centuries. Meanwhile, the varroosis virus lived in a relatively benign capacity on the bodies of the European bees. Once the mites spread to the European bee populations, however, they picked up the virus and injected it into the bees’ bloodstreams. At this point the virus became far more detrimental to the bees, causing their wings to deform and their health to decline. The virus then continued to spread to other pollinators through the saliva and feces of infected bees.

“People didn’t do this on purpose,” Said Lena Wilfert, lead author of the study that confirmed the cause of the spread of varroosis. “People don’t go to the trouble of sending bee queens to the States for stupid reasons. They did it to get better hives or honey, to get more pollination. Until recently we didn’t understand how common it is to spread diseases that way.”