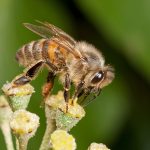 When penicillin’s antibiotic properties were first discovered by accident in 1928, it revolutionized health care. Since then, scientists have been on a never-ending quest to find new antibiotic compounds that are capable of fighting emerging strains of infectious bacteria.

In recent years, however, the bacteria have been winning the race against science.

No new antibiotics have been discovered since 1987, but a number of antibiotic-resistant “superbugs” such as MRSA have begun cropping up in emergency rooms throughout the country. These deadly strains of bacteria have made the search for new antibiotics all the more urgent. Now, scientists may have finally found a new tool in the fight against infectious bacteria in the humble honeybee.

At the University of Illinois at Chicago (UIC), researchers have identified an antibiotic protein in honeybees called Api137 that helps protect the insects from bacterial infections. Not only is this the first new antibiotic discovered in 30 years, it also functions in a distinctly different way than penicillin and other modern antibiotics.

Conventional antibiotics fight infections by attacking the ribosome of a cell where proteins are made. By disrupting the cell’s protein factory, antibiotics can stop the bacteria from functioning effectively and causing illness. Api137 also disrupts protein production, but not by attacking the cell’s ribosome. Instead, Api137 causes “errors” in the process of translating DNA into protein molecules. It’s the first antibiotic of its kind, and it could lead to new treatments for bacteria that have grown resistant to other types of antibiotics.

In addition to being an important development in medical science, the discovery of Api137 gives us one more reason to thank our friend the honeybee.

← The National Honey Board Is Teaming up With Project Apis m.
Winter-Blooming Plants Can Help Pollinators in Your Area →