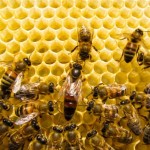 Why do some bees become queens, while others are relegated to lives as worker bees? It all comes down to their diets.

When female honeybee larvae form, they all have the potential to become queens; a nice thought, but not a sustainable option.

A honeybee society consisting entirely of queens would be, well, unproductive. It’s up to “nurse” bees to decide who becomes a queen and who doesn’t. They do so by feeding a select few bees glandular secretions affectionately known in the scientific community as the “royal jelly.” The rest of the bees are fed the jelly for about three days, but are then switched to a diet of honey, pollen, and other secretions. The bees who feed exclusively on the jelly become queens, while the rest become workers.

When scientists first discovered this phenomenon, they reasonably concluded that the royal jelly must contain some extra nutrient that allowed the queens to become larger and stronger than the bees fed on the worker bee diet. Now, a new study is turning that theory on its head.

Researchers in the Department of Entomology at the University of Illinois recently discovered that the “bee bread” mixture of honey and pollen that nurses feed to future worker bees contains p-coumaric acid, a common feature of many plants. What’s interesting about p-coumaric acid, however, is its effect on larval development. When fed to female larvae, p-coumaric inhibits ovarian development, effectively causing the bees to become chemically castrated. It’s a strangely dystopian vision of a society straight out of Brave New World.

It seems that for every fascinating new detail we learn about honey bee society, another perplexing question pops up in its place. How do the nurse bees decide which bees are fit for royalty? How did this developmental mechanism develop in the first place? Are bees completely unique in this respect, or do other species exhibit similarly strange breeding practices?

The answers to these questions will have to wait for another day. Rest assured that in the meantime honeybees will continue to delight and surprise us with every new tidbit of knowledge we gain about them.