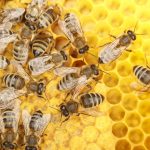 If bees could talk, what would they say? Quite a lot, as it turns out. They don’t talk in words or sentences like we do, but through an intricate dance, and researchers at Virginia Tech have figured out how to understand it.

Humans are the only species with a spoken language, but that doesn’t mean animals can’t communicate with each other. Dogs bark, cats meow, whales sing their songs. But for bees, they dance.

Called the “waggle dance,” this complex dance number involves making a figure-8 formation, with the bee moving up and down in a wiggle through the middle. The waggle dance tells the other bees two things: the distance and the direction to the next flower patch.

So how did the Virginia Tech team do it? By using a calibration tool that studied the movements of individual bees, the team tracked a specific hive in Sussex, England. They then went back to Virginia, bringing their calibration tool with them, and monitored another hive found there.

Their result? The waggle dance is not only understood by the rest of the bees in the hive, but by bees continents away. It’s a universal honey bee language, and, according to Virginia Tech’s other lead researcher Roger Schurch, “a bee from England would understand a bee from Virginia and would find a food source in the same way with a similar success rate.”

Why are Bees Important?

If we didn’t have bees, we couldn’t eat. Or at least, we’d have a lot less food than we do now. Bees are important pollinators, flowering at least a third of the produce we consume each day. It’s why the risk of bee extinction is such a pressing issue. Basically, if we didn’t have bees, you could say goodbye to that avocado toast.

So, by understanding how they communicate, humans will be able to use bees as bio-indicators. “The bees can tell us in high spatial and temporal resolution where forage is available and at what times of the year,” said Virginia tech co-lead researcher Margaret Couvillon. “So, if you want to build a mall for example, we would know if prime pollinator habitat would be destroyed. And, where bees forage, other species forage as well. Conservation efforts can follow.”

← Our Favorite Household Uses for Beeswax
Join us for Our Earth Day Pollinator Pop-Up! →