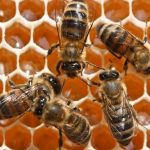 The human brain is a fantastically complex organ that has mystified scientists and philosophers for centuries. The average brain contains about 100 billion neurons that work in tandem to help us perceive the world around us and execute cognitive tasks quickly and efficiently. But because they seem to defy the conventional rules that govern other types of cells, scientists have struggled to understand the mechanism that allows neurons to create consciousness.

Recently, however, researchers at the University of Sheffield have begun using honey bee colonies as theoretical models of the human brain.

Imagine a beehive as a single “superorganism” that can coordinate to respond to external stimuli. Each bee in the hive represents a single neuron, working together with other bees to accomplish their collective goals and solve complex problems. After studying how bee colonies decide where to build their nests, the researchers found that these superorganisms obey many of the same psychological principles as the human brain.

Take Hick’s Law, for example, which states that the brain takes longer to make decisions when it has a large number of alternative options to choose from. Just like our brains, bee colonies are slower to make decisions when they have many different nesting sides to choose from. Weber’s Law, which states that the brain is able to make the best decisions when there is a minimal difference between the quality of its available options, also seems to apply to the decision-making abilities of honey bee colonies.

“This study is exciting because it suggests that honey bee colonies adhere to the same laws as the brain when making collective decisions,” said Dr. Andreagiovanni Reina of the University of Sheffield’s Department of Computer Science. “Finding similarities between the behavior of honey bee colonies and brain neurons is useful because the behavior of bees selecting a nest is simpler than studying neurons in a brain that makes decisions.”

Who could’ve guessed that studying honey bee colonies might lead to the next big breakthrough in neuropsychology?