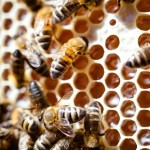 Did you know that in a honey bee colony the queen is the only female that lays eggs? It’s a pretty big job, being the mother to an entire society of insects. But why can’t the other female bees in the colony – the worker bees – lay eggs, too? This is a question that has long perplexed honeybee researchers.

What is it exactly that keeps all the worker bees from producing eggs?

In the 1960’s a biologist named Bill Hamilton identified a gene in worker bees that suppressed their ability to lay eggs. He also found that the gene had a tendency to spread throughout worker bee populations. The question remained, however, as to what was activating this gene and causing it to spread. Now, over 50 years after Hamilton conducted his research, another team of biologists has found an answer.

These biologists conducted further research into honey bee genetics and discovered a gene that determined whether workers were fertile or sterile. They named the gene “Anarchy.” Upon closer inspection, they found that the gene’s influence was dependent on the presence of a queen. When a queen was nearby, the gene would become more prominent and inhibit egg production. When the workers were not near a queen, the gene’s influence would subside and the bees would begin producing eggs. So what’s going on here?

The researchers found that queen bees produce a pheromone which activates the Anarchy gene in worker bees. So as long as there’s a queen in the colony, worker bees will remain sterile. The only time workers are able to produce eggs is after the queen has died. And so, the queen is able to keep her loyal subjects focused on working while she takes care of all the egg laying.

It seems the more we learn about honey bees, the more fascinating they become!

One Response to Scientists Discover What Makes Worker Bees Sterile