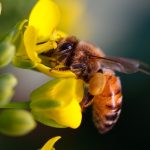 Honey bees have faced their fair share of challenges in recent years, and now it sounds like beekeepers might have yet another issue to worry about. According to a recent study conducted at the University of Illinois, honey bees may have a fatal attraction toward a common type of toxic fungicide.

The researchers found that bees in their study exhibited a preference for sugar syrup that was laced with a fungicide called chlorothalonil. This is troubling, because fungicides like chlorothalonil are known to exacerbate the negative health effects of other pesticides, such as the ones that are used to treat varroa mite infestations. Chlorothalonil also kills the beneficial fungi that live in bee hives. One researcher involved in the study observed that, like humans, bees “sometimes like things that aren’t necessarily good for them.”

The good news is, the bees weren’t attracted to all fungicides.

The researchers also tested two other types of fungicide during their study, and found that bees avoided one of them altogether and remained neutral about the third option. This means that there could still be safe fungicidal options available that can effectively protect crops without harming local bee populations. With further research, scientists may be able to definitively identify which fungicides are safe for pollinators, and which are not.

Interested in sampling some of the fresh wildflower honey we harvest right here in Southern California? You can browse our honey varieties online, or give us a call today to learn more!