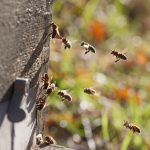 No matter how much we learn about honey bees, it seems there are always fascinating new insights to be gleaned about these remarkable creatures. Recently, scientists at the University of Granada in Spain developed an algorithm based on the social behaviors of honey bees that’s designed to help law enforcement agencies combat organized crime.

A colony of honey bees has a robust, complex social structure with different bees occupying different roles in the society.

These bees communicate with one another and organize themselves to achieve goals that benefit the colony as a whole. In essence, this organizational structure is quite similar to that of a crime syndicate. That’s why the scientists in Granada decided a honey bee colony would serve as an ideal testbed for developing strategies to dismantle organized crime groups.

After observing and analyzing the behavior of their bee colony over time, the scientists were able to create an algorithm that identifies weak points in the social structure and predicts possible outcomes. Humberto Trujillo Mendoza, a behavioral scientist who helped develop the algorithm, compares it to a program that plays chess against humans.

“In order to find the most effective way of dismantling a network, it is necessary to develop and put into action an optimization process that analyzes a multitude of situations and selects the best option in the shortest time possible,” said Mendoza in an interview. “It’s similar to what a chess program does when identifying, predicting and checking the possible steps or path that may occur in a game of chess from a given moment to moment.”

Hopefully, with the help if this new bee-based algorithm, law enforcement agencies will be able to find new, more efficient ways to stop organized crime groups before they pose serious threats to human societies.