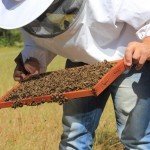 If you’ve been following our blog, you may remember that back in August we wrote about the devastating impact neonicotinoid pesticides have had on honeybee colonies. Research has demonstrated that these pesticides, which are derived from nicotine, compromise the nervous systems of bees and make it difficult from them to navigate effectively. Worse yet, bees can get addicted to these pesticides in much the same way that humans get addicted to tobacco products.

Some jurisdictions have sought to outlaw the use of neonicotinoid pesticides, but this presents another problem, at least in the short term. Currently, farmers don’t have a viable alternative to these pesticides to protect their crops. Without them, they stand to lose huge crop yields. With these considerations in mind, students at the University of British Columbia went to work to find a solution that would allow farmers to use neonicotinoid pesticides without putting honeybee colonies at risk.

The researchers at UBC knew that naturally occurring probiotics help bees digest their food. So, they thought, why not introduce a new probiotic into their diets that would break down the harmful compounds in neonicotinoid pesticides? The team spent the summer synthesizing combinations of microorganism in hopes of finding one that might protect the digestive systems of bees from pesticides.

Several months and many experiments later, the researchers found one that worked and promptly dubbed it the “pro-bee-otic.” With the aid of these microorganisms, the bees studied by the researchers became resistant to the detrimental effects of neonicotinoid pesticides.

The pro-bee-otic isn’t approved for commercial use yet, but the researchers are hopeful that by introducing their discovery into the sucrose diet of honeybees they might be able to avert a full-blown pollinator crisis. The best part is that once the probiotic is that once some bees consume the probiotic, they will naturally spread it around to other bees in their colony.

It’s an exciting prospect that has the potential to make a huge difference in the fight to save the honeybee.

Stay tuned for the latest buzz from Marshall’s Farm Honey!