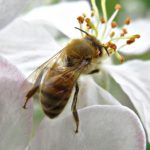 For years, beekeepers and entomologists have assumed that honey bees prefer to forage in urban areas rather than on agricultural land because there is more plant diversity in and around cities. Since crops contain only one species of plant, scientists thought that bees would be less interested in foraging on agricultural land. But now, a recent study conducted at Ohio State University (OSU) is casting doubt on this long-held assumption.

The authors of the study examined the foraging preferences of honey bee colonies in an apiary in central Ohio from late summer to early fall. The apiary was conveniently located on the edge of an area where residential developments transition into rural farmland. All the researchers had to do was wait to see where the bees traveled to gather nectar and pollen.

The research team set up video recording devices in the bee colonies so that they could watch the dance patterns of bees as they returned to their hive from their daily foraging trips. The foraging bees use these dances to direct other bees to nearby food sources.

After analyzing their dance videos, the researchers found that the bees overwhelmingly preferred local agricultural lands to the plants in nearby neighborhoods.

“Honey bees didn’t seem to care that much what the floral diversity was,” said Douglas Sponsler, a graduate student in entomology who participated in the study. “What they wanted was large patches of their favorite stuff.”

Despite the seemingly conclusive findings of this research, it’s important to remember that it’s just one study. It’s possible that the bees in this apiary preferred the agricultural lands in central Ohio because of some factor that the researchers didn’t account for. By applying the same methodology to future studies in other regions, we could get a clearer picture of what it is that bees look for when they forage. This, in turn, could help us to cultivate plants in areas that will be especially attractive to bees and other pollinators.

To learn more about the research findings, you can check out the complete study in the Journal of Urban Ecology.