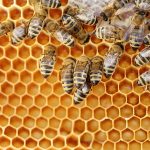 A new study suggests that bees can be trained to understand numerical symbols, implying that these fascinating creatures are capable of tackling far more complex cognitive tasks than previously thought.

In a paper published in the Proceedings of the Royal Society B, an Australian and French research team claims to have taught honeybees to match specific symbols with quantities. The study sheds light on how numerical abilities may have evolved over time, and potentially opens up avenues for communication between humans and bees.

We already know, thanks to the work of Nobel Laureate Karl von Frisch, that bees communicate with one another using dance-like movements.

Previous experiments with animals including monkeys, chimpanzees, pigeons and parrots have shown that some animals can learn to represent numbers with symbols, but this is the first time the ability has been demonstrated in insects.

While humans are the only animals to have developed symbols that represent numbers, the study helps explore how large a brain needs to be to associate symbols with numerical figures. Bees have fewer than a million neurons in their brains, compared with humans’ 86 billion.

The same team previously conducted experiments suggesting that bees can do basic math and understand the concept of zero, although some scientists are skeptical, believing that the bees may have been responding to other cues.

Nevertheless, these studies show that bees’ brains are far more sophisticated than most people think.

At Marshall’s Farm Natural Honey, we take a hand-crafted approach to traditional honey production, cultivating hives in the unique microclimates of the San Francisco Bay Area. Browse our honey products online or give us a call at our toll-free number today to learn more!