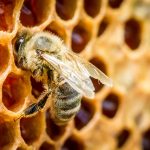 You probably already know that nicotine is bad for humans, but did you know that it can also harm bees?

Neonicotinoid pesticides, which are derived from nicotine and have been commonly used since the 1980s, were designed to eliminate harmful pests. However, recent research has found that the pesticides can also compromise the immune system of bees, making them more susceptible to diseases caused by parasitic Varroa mites. They are also believed to damage bees’ central nervous systems, resulting in impaired memory, movement and even death.

Despite their ill effects, bees tend to prefer the pesticides over their own food sources, just as humans become addicted to the nicotine in cigarettes and other tobacco products.

Neonicotinoids may even be contributing to the disturbing phenomenon of colony collapse disorder, in which worker bees abandon their colony, leaving behind the queen and immature bees. Bees are necessary for pollinating about a third of the world’s crops, so maintaining healthy bee populations is something we should all care about.

Fortunately, the EPA is moving to curb the potentially disastrous environmental impact of neonicotinoid pesticides, and has recently banned a dozen of them. As of May 20, 12 neonicotinoid-based products made by three major firms are now prohibited. The firms—Syngenta, Valent and Bayer—volunteered to stop selling, using and distributing these products.

However, the battle is far from over, as 47 neonicotinoid products remain on the market.

At Marshall’s Farm Natural Honey, we’re working hard to protect and preserve the honey bee colonies in our area. We take a hand-crafted approach to traditional honey production, cultivating hives in the unique microclimates of the San Francisco Bay Area. You can browse our natural honey products online or give us a call today to learn more!