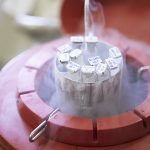 With honeybee colonies struggling to recover from years of population decline, scientists working at the US Department of Agriculture laboratories in Fargo, North Dakota are hedging their bets in a new facility designed to preserve the genetic material of honeybees for future generations.

Until recently, honeybees were the only domesticated species that didn’t have an established repository for sperm and embryos.

That’s because it’s a whole lot harder to extract and preserve genetic material from honeybees than it is from other large domesticated species like dogs or horses. It’s particularly difficult to preserve bee embryos without damaging them in the process.

“Dippin’ Dots have that really smooth texture to them,” said cryobiologist Joe Rinehart in an interview with Minnesota Public Radio. But this type of ice cream is “actually not frozen,” he explains. “It’s vitrified. We’re doing basically the same stuff to the embryos.”

The scientists start by removing the waxy covering on embryos by dipping them in common household chemicals like isopropyl alcohol. Once this protective layer is removed, the chemicals replace most of the water in the cells, protecting them from damage during the vitrification process. If too much water is left in the embryo, ice crystals will effectively destroy the embryo when it’s cooled to sub-zero temperatures. Once the water has been removed and replaced with chemicals, liquid nitrogen is used to flash cool the embryos to about minus 250 degrees Fahrenheit. To maximize the chances of success, embryos must be preserved within a narrow 40-minute window when they are three days old.

Ultimately, the scientists hope to create a diverse database of honeybee genetic material that can be used to support bee populations in the future.

“The dream is that we will take an embryo out of storage, raise it into a queen bee and then inseminate it with cryopreserved sperm and get a colony,” says Rinehart. “That’s the dream.”

This would not only help to protect bee populations, but also give beekeepers the ability to select bees from specific genetic lines. Over the course of several generations, this could allow beekeepers to develop a more robust honeybee genome that’s resistant to disease and other environmental stressors, potentially preventing another crisis like the one caused by colony collapse disorder.