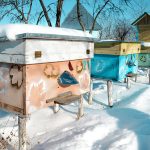 You know the expression these days: “there’s an app for that?” Well, when it comes to beekeeping, now there’s a device for that. According to a report from earlier this month, researchers at the University of Illinois have created a device that offers a useful glimpse into the lives of honey bees during the winter.

The researchers call their device “WaggleNet.”

WaggleNet is a sensor array that beekeepers can place inside a hive before the temperatures drop, that allows them to monitor its temperature and humidity during the wintertime. It can be dangerous—and potentially life-threatening—to open a beehive when temperatures fall below 50 degrees Fahrenheit.

With “WaggleNet,” data from the sensors is relayed back to the university’s beekeeping database, allowing local beekeepers to monitor hive activity in real time without disturbing their bees. The system doesn’t require an Internet connection, as it uses neighboring connections to transmit information back to the database. The WaggleNet device is also solar powered, so it can be used it remote areas that might not be connected to an electrical grid.

“There’s a general curiosity with beekeepers as to what’s going on inside the honey bee colonies, especially during the winter time when we are unable to access the indoor colony because of the weather,” said Alison Sankey of the University of Illinois’ Bee Research Facility in an interview.

Thanks to these researchers, beekeepers in Illinois can keep a close eye on their colonies during the winter to make sure they stay within acceptable temperature and humidity limits. Now, the research team plans on improving the WaggleNet device’s ability to collect and store solar energy so that it can function longer without needing to be recharged.