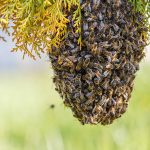 If you live in an area where farmers use honeybees to pollinate their crops, you might be able to spot a huge mass of bees huddling together on the outside of their hive this time of year. This behavior, which can be easily mistaken for swarming, is called bearding. When bees swarm, they leave the hive in a group to search for a new home. When they beard, they cluster together on the exterior surface of their hive in a tight formation that resembles a man’s beard. So why do honey bees engage in this peculiar behavior during the summer?

It’s all about regulating the temperature of their hive.

On hot days, the average temperature inside a bee hive can hover between 90 and 95°F. If the temperature gets much hotter than that, it can threaten the health of the hive’s brood. That’s why bees employ a few surprising strategies to keep their hives cool when the temperature becomes dangerously hot. In some cases, bees will air condition their homes by placing water droplets in the hive and fanning their wings to generate air currents that evaporate the water and cool the air inside. But when it gets really hot, the bees will go outside and huddle together while furiously beating their wings to facilitate airflow and cool off the hive.

This swarm-like behavior may look a little intimidating at first glance, but it’s a perfectly harmless and remarkably effective way for honey bees to keep their hives cool on hot days. If you see bees bearding on a hive this summer, just think about how hot you’d get living in a windowless room with a few thousand of your closest friends and family members!