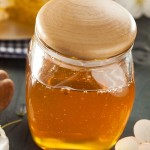 Anyone who’s had the pleasure of tasting pure, raw honey knows that store-bought alternatives just aren’t the same. According to the FDA, that’s because roughly three-quarters of the honey you find in grocery stores has been so thoroughly filtered and pasteurized that it simply isn’t honey anymore. In an article in the Huffington Post, Richard Shiffman describes the pseudo-honey as a “watered down, reconstituted hodge-podge of the real deal mixed with other cheaper, less savory, and often less safe, ingredients.”

So how can we tell the difference between this pseudo-honey and the nutritious, delicious real deal?

The only definitive way to know for sure is to look for pollen grains under a microscope. While raw honey is chock full of pollens, enzymes and nutrients, processed honey has been so thoroughly “refined” that it is sometimes completely devoid of these ingredients. Likewise, this store-bought honey becomes virtually indistinguishable from other highly processed sugar syrups.

Legally, these cheap pollen-free imitations cannot technically be labeled as honey. Because the FDA doesn’t have the time or resources to inspect every honey product sold for authenticity however, many of these highly pasteurized syrups are still labeled as honey products.

In a report released by Food Safety News, Richard Adee, the Washington Legislative Chariman of the American Honey Producers Association, had this to say about ultra-pasteurized honey products. “It’s no secret to anyone in the business that the only reason all the pollen is filtered out is to hide where it initially came from and the fact is that in almost call cases, that is China.”

According to the FDA’s report, American consumers are effectively being duped into buying an unhealthy, over-processed imitation of honey so that food manufacturers can source their product from cheap overseas markets.

Here at Marshall’s Farm Honey, we’re committed to providing our customers with healthy, nutrient-rich pure honey harvested right here in California. You won’t find any of those store-bought sugar syrups here. Give us a call today to learn more about the many virtues of pure, unpasteurized honey.

← Innovative New Hive Design Aims to Minimize Stress in Bees
Ever Wonder How Bee Swarms Navigate to a New Home? →