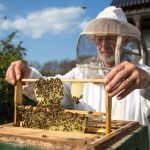 There’s still plenty of work that needs to be done to protect America’s honeybee populations, but a recent survey of nearly 5,000 U.S. beekeepers has some much-needed good news for our favorite pollinators. According to the Bee Informed Partnership survey, American beekeepers lost 21 percent of their colonies during the winter of 2016. While this might not seem like good news at first glance, this figure represents the lowest number of winter colony losses in more than a decade.

In the winter of 2015, by comparison, beekeepers lost close to 27 percent of their colonies. Ultimately, the U.S. Government would like to keep winter honeybee losses below 15 percent.

Entomologists are attributing the decline in winter losses to a reduction in varroa mites, which have ravaged honeybee populations for years. Recently, beekeepers have begun employing new tools in the fight against these deadly parasites, and their efforts appear to be paying off. But in spite of the marked decline in winter losses, honeybee experts are hesitant to make positive predictions for the future.

“We would of course all love if the trend continues, but there are so many factors playing a role in colony health,” said Elina Lastro Nino of the University of California Davis in an interview with CBS News. “I am glad to see this, but wouldn’t celebrate too much yet.”

If winter losses continue to decline over the next couple of years, then we might have a real reason to celebrate. By working together, we can all do our part to protect pollinator populations and ensure they’re able to thrive in the future.