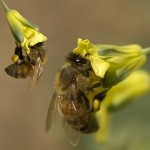 In recent years, we’ve gotten pretty accustomed to hearing dire warnings about the plight of pollinators. Colony collapse disorder (CCD), a phenomenon we still don’t fully understand, has claimed the lives of millions of honeybees over the course of the past decade. In one year alone (between April 2014 and April 2015), it’s estimated that U.S beekeepers lost more than 40% of their colonies to CCD. Agriculture industry experts are concerned that if the problem persists and pollinating species continue to die at this alarming rate, we may very well find ourselves in a food shortage crisis.

But What if Some of the Bees Aren’t Dying?

Back in June, following the worst winter in history for bee colonies, Nature Communications published a study with a welcome nugget of good news for pollinators, albeit one that comes with a caveat. The study found that while many different bee species contribute to crop pollination, nearly 80% of all the crops in North America and Europe are pollinated by a mere 2 percent of the total bee species. This means that a tiny contingent of wild bee species is doing the vast majority of the pollinating legwork, while the other 98 percent are making more modest contributions.

The good news? The 2 percent of bee species that do most of the pollinating in North American and Europe aren’t threatened. In fact, their numbers appear to be holding pretty steady. The bee species who have been especially ravaged by CCD aren’t the ones who are doing all the pollinating.

Of course it can’t all be good news. Even if the dominant pollinating species are doing alright, there are still many other species being decimated by CCD. Biodiversity is good for ecosystems. When hundreds or even thousands of bee species start dying off, it can leave the remaining species vulnerable to other unforeseen afflictions. This might be short term news for European and North American food crops, but it’s not great news for the bees. Imagine if a virus was introduced into the ecosystem that was particularly detrimental to that vital 2 percent of bee species. Then we’d really be in trouble. Hopefully, though, we might be able to study these bee species and discover what it is that makes them less prone to CCD.

The really good news is that people are finally listening up and taking action to curb the loss of bee species before it’s too late.